I started off the project by saying “I want to wear A.I”.

Then I got a bit stuck after researching about the future possibility of automation, job replacement and all these issues discussed by various fields of experts, from computer scientists to economists and historians… I felt like the issue is vast and urgent. and if I create an artifact that directly physicalize any of these narratives, it will become “in your face” didactic…

so I decided to go back to my original point. “Why did I say I want to wear an AI?”. In my mind, I had an image of wearing an A.I. like being John Malkovich. Except in movies, audience become the one who is inside the portal, but in my imagination I am the John Malkovich and A.I. in my portal. This sketch further explore this idea.
I guess I wanted to experience how it feels to give away my agency and let someone/thing else deciding for me what to do… as if I ride as a vehicle for someone else’s mind while still I have an experience of my own. This was my imagination of how the replacement of human to A.I. will be, in very cynical way. When we switched from hand weaving to industrial Jacquard loom in factories, the machines replaced the human body, but not the agency of the body. but the current discussion of the automation and job replacement by A.I is beyond the body replacement.
Also, when I thought about A.I., one of the reference that came to my mind was the story of GOLEM XIV by Stanisław Lem. In this story, the A.I. mentions that its experience is never the same as humans as it does not have the bodily experience. So, by borrowing my body to A.I., it can experience the body and the world through the body. This is a bit similar to what they did in the SF movies like Her and Blade Runner2049.

I looked into what I meant by A.I. when I thought about this. It is human like entity that makes decision or suggestions, like Eliza, Siri and Alexa, but a lot smarter than just chatting…It can also beat world chess champion. I somehow had this vague idea that it is a machine that can learn like human, build of artificial neural network…
As I learned more about A.I. actually there are many types of technique behind A.I. and not all of them are Artificial Neural Network or Machine Learning. In fact the research group I visited in Cork, who are my host for the Vertigo residency, are working mostly on optimization technique, which is also a part of A.I.. Then I wonder what is even A.I.? Is there a single definition??
Of course when you have these questions, the pace to turn into is wikipedia in 2019. So here is the definition by wikipedia >> https://en.wikipedia.org/wiki/Artificial_intelligence

what I think interesting is our association of A.I. with human likeliness, and seeing it as artificially made human. Especially when it has a voice of human like synthesis, and using natural language, we see a person in it. And it is computing with “neural network”! There are a lot of optimism and anxiety as it sounds more than a new machine in a factory.

I see many of these “issues” that are around A.I. are society and human issues, and I would like wider public to participate in the discussions. For this, I would like to reduce the A.I. from an intelligent agent to mere tool, to de-mystify the technology so we all can participate in discussion. This is my take in this project.

As I said earlier, I thought A.I. is a neural network. and I think for a lot of people this association is there. So, I started to learn how to make a simple neural network to understand how it is made and how it works. I came to the point to create simple multi layer neural network, with 2 input neurons, 2 hidden layer neurons and 1 output neuron with back propagation with python. And I was surprised that it is nothing like neuron, but a series of mathematical functions that can adjust parameters within the function. The way we call them “neurons” is misleading, in my opinion.
But I must say I was quite fascinated with this new ways of computing, and also the structure of it. In fact you can “train” and “learn” the system is also interesting. So, I decided to take this fascination to an artwork and go deep with it.

I wonder if one can make textile version of “Artificial Neural Network (ANN)”. Wolfgang Spahn and Christian Faubel made an analog neural network using analog components and physically networking them. Irene Posch and Ebru Kurbak made a beautiful computer with textile using coil wire, magnetic beads and embroidery technique. Inspired by them, I started to try-out if I can make an e-textile version of neural network.

My first tryout was to re-create the python tutorial simulation I made with microcontroller (attiny85) as each neuron. the input is replaced with potentiometer so I can directly input microcontrollers, and the result of the “neuron” is transmitted to next neuron via light intensity through optic fibre and LDR to read the light intensity. This way one can see the communication between the neurons.
My first try-out was just with forward calculation. I have already simulated the exact same system on python and hard-corded the weight and bias on each neuron/attinys. The tricky part is to calibrate the LDR reading with the data that is actually sent as LDR is not linear. Also, I am using PWM to adjust the light intensity and LDR sees the frequency so I had to add a big capacitor to damp it.
Still, the result seems quite good. It is nice to see the weight shifting on each neuron and the final outcome changing. 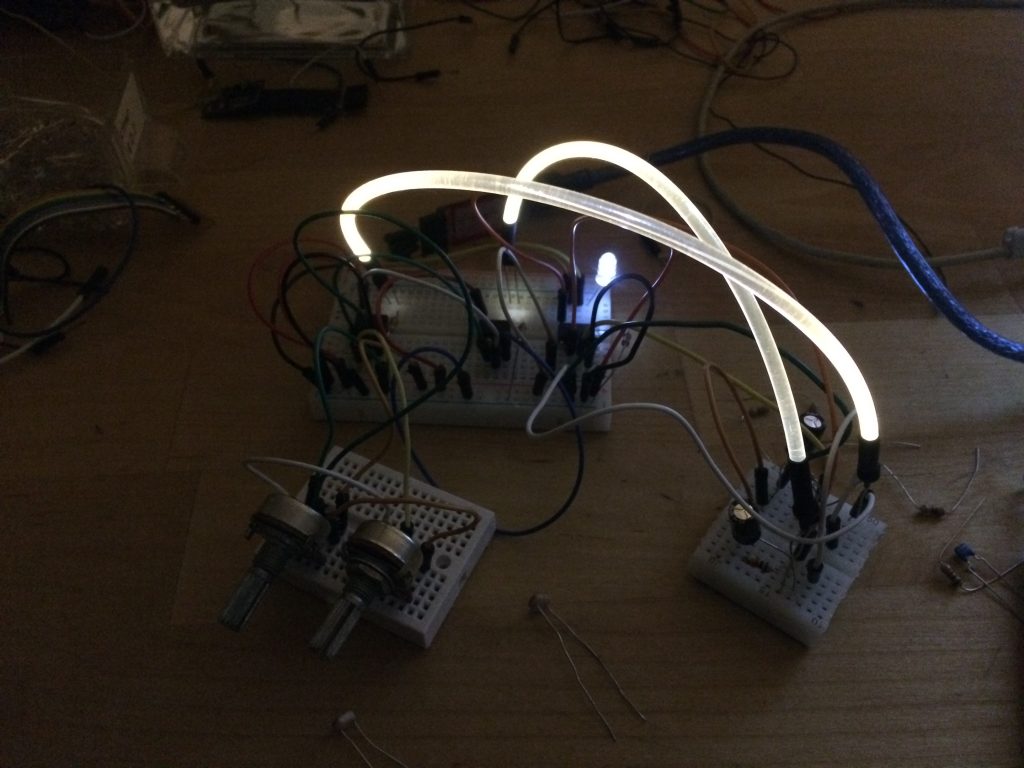 The next goal is to implement the back propagation so it can actually “learn”.

Overall, the current project scope is to make an e-textile artificial neural network on fabric, and assemble them as garment so one can wear them. The functionality of the system is still under development, but most probably some kind of classifier.

The e-textile neural network will not directly address the issues around work places. But at the moment I feel much better to not directly connect it. Instead, I am planning to make a series of interview movies with various background person and edit it as one film documentation. This idea came as I was interviewing the researchers at CONFIRM/INSIGHT, it was very nice to hear the direct voice of people rather than being translated to abstract. And I felt it will be nice to juxtapose this with the artifact to discuss the topic I am interested.